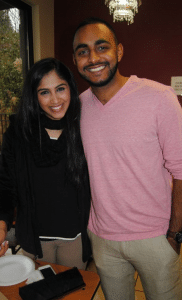 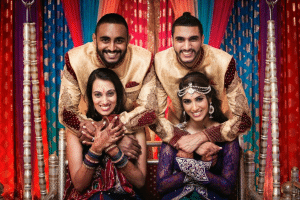 A family photograph at Benish’s wedding in August 2015.

I live in a joint family. That’s all that I’ve really known. My dad is the oldest of five in his family, and is very close to his younger brother, the youngest of the five. Anyway, my dad got married first to my mom, who is also one in five. At their wedding, his younger brother met my mom’s youngest sister and fell in love. There were always four pairs of eyes watching over the four of us. We couldn’t get away with anything!

My parents have three kids, and I’m right in the middle. My uncle and aunt only have one who is about ten months younger than I am. My relationship with each of them is unique. Looking back on my relationship with my older sister Asma, I know I was probably the biggest pain in her life. I wanted to be exactly like her, and copied everything she did. We’re five years apart, so I understand how difficult it was when my mom dressed us up in the same outfit. She came as my plus one to my eighth grade banquet, and I remember how irritated she was when everyone though she was my twin.

I’ve always called Ahsan my brother (the one who is ten months younger than me). We’ve pretty much done everything together. We went to the same school for most of our lives, got our cell phones at the same time, and went out with friends together. Although he’s younger than me, he protects me like an older brother, even when I’m out with my husband. He’s extremely laid back. Since we are so close in age, we’re not afraid to keep each other in check. 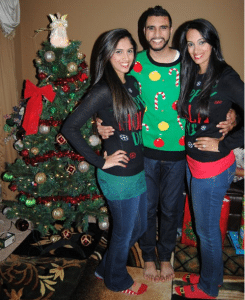 Bilal is the youngest, and has always gotten away with the most. I remember my dad’s 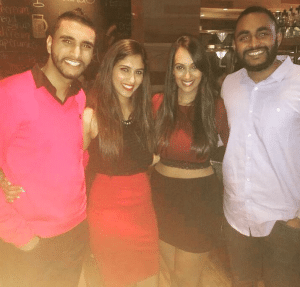 Zinburger for an evening of fun and laughter!

go-to phrase as we were growing up, “Dear, he’s young. When he grows up, he’ll understand.” We all still hear that from time to time… just kidding! He’s wonderful. We’ve gotten really close throughout the past couple of years. Recently, I was able to understand my sister’s frustration when people started asking if we were twins. We’re also five years apart.

In honor of National Siblings Day, I wanted to let my siblings know how much I love them, and how grateful I am for them. I hope you do the same!  🙂