One of my friends suffered from an eating disorder. “It’s like a game,” she told me. “One day you eat an apple, and the next day you see if you can survive on half.” She said she felt that was the only thing she could control in her life, at the time. I would have never guessed by looking at her or talking with her that she ever battled an eating disorder.

The Eating Disorders Information Network is a great organization that works to prevent eating disorders through public awareness and education. Last Thursday, Beaty Facial Plastic Surgery had the opportunity to support EDIN’s efforts by sponsoring their 6th Annual Celebrity Dance Challenge at the Buckhead Theatre.

The show started off with a short video introducing EDIN, and its efforts to help all demographics. We saw a middle-aged man, a woman in her 60s that has battled anorexia her entire life, and a thirteen-year-old girl. Once the video was over, Bert and Mara introduced the first couple participating in the competition: Lisa Senters-McDermott and Christjohn Batte. After their flawless performance, we found out Lisa was dancing with a broken rib! 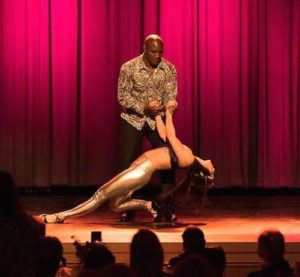 Although I loved Brian Moote (from the Bert Show) and Jacklyn Helm’s performance, Christi Paul and Terry Herron’s performance was my favorite! In her introduction clip, Christi mentioned her love for dancing, and the reason she stays active – she wants to be a fit grandma for her grandkids. Halfway through her performance, her daughter made an appearance, and stole the hearts of the audience. 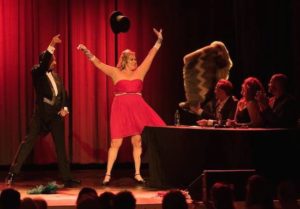 Bert and Mara announced Chisti and Terry as the winners according to the judges. Lisa received the MVP Award for “A broken rib couldn’t take me out of the competition,” and came in second. Ted Blum had a huge fan base at the event, and they raised the most money for the Eating Disorder Information Network! Ted and Natalie were awarded with trophies, and because they were the audience’s favorite, won the competition!

Everyone involved with this year’s dance challenge did a marvelous job! Our team and friends had a wonderful time. I overheard Dr. Mark Beaty talking with Dr. Laura Beaty at the event about how much he enjoyed it. You never know, you may even see him own the stage at the next Celebrity Dance Challenge. I can’t wait!

Check Out Some Photos from the Night!

Posted in: Health and Lifestyle