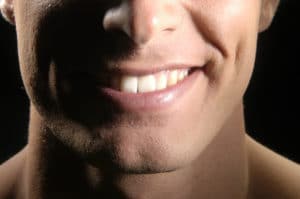 So, you were lying around blobbing and came across a showing of Spartacus starring Kirk Douglas. After reveling in the slave rebellion and assorted doings of Mr. Douglas, you had to take a bathroom break. When checking the mirror, the weak chin that looked back at you was anything but Douglasian. And it’s been that way forever. But, of course, who has a chin like Kirk Douglas?

You can…if you have chin augmentation with Dr. Beaty.

Who needs a new chin?

While it may not be necessary to add a sign of strength to lead a slave rebellion against the Roman Empire, many of us wish we had a stronger chin. Often, we’re stuck with a weak chin that lacks definition and projection. Some people even see their chin as receding. Dr. Beaty usually performs chin surgery to augment the chin, but is can also reduce a chin that is overly large or protrudes too much.

How is chin augmentation done?

Dr. Beaty has two choices for where to make the incision to insert the implant(s). He can make the incision under the chin (submental) or inside the mouth (intraoral). Implants come in different shapes and are usually made of silicone or polyethylene. To prepare for the implant, Dr. Beaty makes a pocket in the connective tissue inside the chin, being careful to avoid the major nerve in the area. The implant is then placed atop the chinbone. The procedure is pretty straightforward, taking just 30 to 45 minutes.

Dr. Beaty can also perform what is known as genioplasty, a repositioning of the chin bones to achieve the desired projection or to reduce size.

Augmentation can also be achieved with dermal fillers, particularly Perlane and Restylane. Unlike implants, fillers provide only temporary results as the body absorbs the filler material over time. Dr. Beaty has had patients try augmenting their chins with fillers and then later opt to make the changes permanent with implants.

Obviously, your results are immediate. Patients typically feel slight numbness in the chin and the lips, as well as swelling and bruising in the area after the procedure. This is easily manageable with pain medication and cold compresses. Any pain generally passes in a few days. Most patients can return to work and day-to-day activities in a week or so.

Want to give your chin the Spartacus treatment? Call Dr. Beaty at 770-727-1824 and schedule a consultation for chin augmentation.