Home » Our Blog » Enjoy the Show 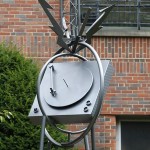 The sculpture, entitled “Thunder Waves of Universal Sound” was crafted by Gary Bibbs.

Dr. Beaty’s alma mater, the University of Kentucky, held a sculpture dedication last Saturday for its college radio WRFL, 88.1 Radio Free Lexington. As a WRFL founder, he was invited to speak about the station’s influence on the community. Standing next to the prestigious embodiment, Dr. Beaty eloquently said, “This piece of art immortalizes the beginning of a great project. One that through a combination of talent, timing, luck, and perseverance became a lasting icon for this community. The real achievement, though, has been in the effort and the creativity that both established and sustained this project now through 25 years.” 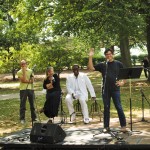 Dr. Beaty shares the stage with other WRFL contributors and alum.

Although his industry has shifted from music to medicine, the same core of successful values is apparent in both WRFL and

Beaty Facial Plastic Surgery. Where Dr. Beaty originally composed harmonious musical sets, he now creates harmony among facial features. He continues to push the bounds of artistry, this time visual versus audible. Dr. Beaty remains differentiated by his genuine devotion to the public, reflex to lead by example, and ardent belief that “the act of trying is really the point”.