Home » Our Blog » Tell the Stories, but Ditch the Tattoo

Tell the Stories, but Ditch the Tattoo 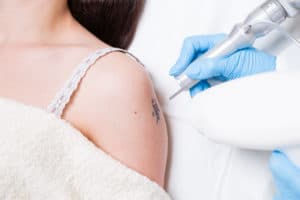 If there’s one truism, it’s that every tattoo has a story behind it. Some of those stories could be a little cloudy considering the addition of alcohol to the evening in question. Still, every piece of body art does have a story. The question is, what if you don’t want to hear that story any longer? Your tattoo is as stubborn as a two-year-old throwing a tantrum.

Your wife probably doesn’t fully appreciate the name of your former girlfriend on your bicep.

That Phoenix rising from the ashes across your neck isn’t all that popular with your new employer.

And this isn’t taking into consideration aging. As our skin slackens with age, so will that tattoo. In 20 years that dragon could begin to look more like a Chinese Shar Pei.

Removing tattoos used to be a very difficult process. There were only three ways to get rid of a tattoo: surgery to remove the skin, acid bleaching, and dermabrasion (basically sandblasting of your skin). All of them were just as pleasant as they sound.

Fortunately, along came lasers. Lasers can remove any tattoo, return your arm, neck, shoulder, calf, or wherever to its pre-tattooed clarity. While not immediate, tattoo removal with Dr. Beaty is very successful and patients are satisfied with their outcomes.

How does it work?

At Beaty Facial Plastic Surgery, we use a Spectrum laser that delivers quick, high-energy pulses that are absorbed by the pigment in the tattoo. The energy breaks the pigment into particles small enough that they can then be cleared from the body by the lymphatic system.

Now many treatments are necessary?

Just how easy or hard it is to remove a tattoo is predicated on the number of colors, depth, age, a chemical composition of the inks, and other factors. Black, red, dark orange, and dark blue tattoos respond quickly, while certain other colors such as green, purple, brown, and light colors take more time. Most tattoos require some treatments spaced from six to eight weeks apart.

Tattoos take from 3 to 13 treatments to go the way of the Dodo bird.

The procedure has a little discomfort, but not much. We apply an anesthetic cream to the location before beginning the laser treatment. After each treatment, you will have three to four days of sensitivity at the site. You’ll also need to apply an over-the-counter antibiotic to the site and keep it covered.